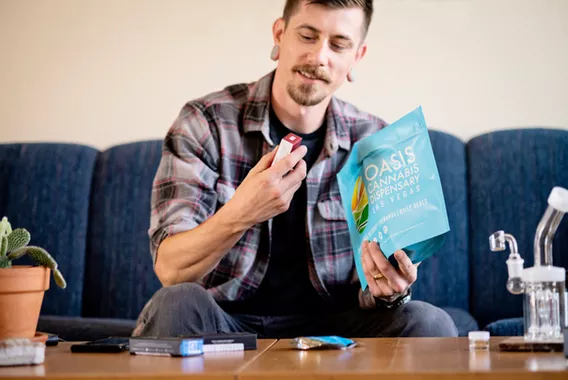 Oasis appreciates you staying home for Nevada, so we made a list of binge worthy tv shows and movies that are currently available on your favorite streaming services. Better yet, we gave you smoking recommendations for each program. So kick back, turn on the T.V., order in, and turn your isolation into a vacation!

We’re all in this together, so we’ll be adding more to the list as the quarantine progresses.

Best described as Donald Glover’s diary, Atlanta is an FX series about an up and coming rapper, Paper Boi (Bryan Tyree Henry), and his manager/cousin, Earn (Donald Glover). Seeing as it was created by Childish Gambino himself, Atlanta is grounded in reality, and shows the true life struggle at the ground floor of the music industry. Despite its down to Earth atmosphere and introspective social commentary, “Atlanta” is regularly, side splitting funny. Darrius (Lakieth Stanfield), provides much of the comic relief, but the entire ensemble is perfectly casted and each character has both depth and their own sense of humor. This masterpiece would pair best with any OG, as Hip-Hop and OG’s are like peanut butter and jelly. It’s a vibe, so roll one up some of Summa’s Stoney OG and binge the first two seasons on Hulu before the third season comes out next year.

If you need a good laugh, Iliza Shelshinger’s got you covered. She has several Netflix specials, but Elder Millennial would be my recommendation. With relatable jokes on everything from dating to social media, Shelshinger skillfully offers insight into being a 21st century woman. This unique standup special would be complimented by any strain high in Limonene. May I recommend City Tree’s Black Cherry Punch Live Resin Sauce? Not only does it have 13.8 mg/g of the “Happy Terpene”, but it’s a bargain at $21 a half gram!

Looking for a little action? Look no further. John Wick: Chapter 3 is the end all be all when it comes to the action movies of today. If you’re late to the party, here’s the deal: every assassin in the world is after the million dollar bounty on John Wick’s (played by America’s sweetheart, Keanu Reeves) head. But the Boogeyman of the underworld is going to give them all a run for their money. Chapter 3 doubles down on the iconic choreography that the series is known for, while raising the bar with breathtaking motorcycle sword fights and killer canines. HBO has the movie, but Oasis has the 707 Headband Cartridge from Remedy to go with it! It’s a superb hybrid that leans just a little towards the indica side, and given how visceral Parabellum is, I wouldn’t want anything to stimulate me even more. This 707 will plant you firmly in the couch but won’t knock you out before the film’s video game esque climax.

Chilling, smart, riveting. Mindhunter isNetflix’s critically acclaimed, psychological thriller about the birth of criminal profiling in the FBI during the late 70’s. Inspired by true events, Mindhunter follows Special Agents Ford (Johnathan Groff) and Tench (Holt McCallany) as they interview infamous serial killers from Edward Kemper to Charles Manson. It’s an unsettlingly real look down the darkest alleys of the human psyche. It’s a slow burn, so you’ll want something that burns slow. Consider an infused pre-roll. We have Infused Huckleberry Hemp Blunts from Hunter & Leaf coming in at an impressive 40% THC to accompany you on your journey to Hell and back, and they’re only $25.

If you’re an anime fan and you haven’t seen Hunter x Hunter yet, you’re really missing out. Lucky for you, Netflix just added the fourth season and you have all month to catch up! Hunter x Hunter is about a young boy who follows in his long lost father’s footsteps and becomes a Hunter: a powerful individual who searches endlessly for the most exotic treasures life has to offer. It’s an imaginative, character driven saga that runs on originality. For this fun filled adventure, you’ll need an edible that’s just as fun, I’d recommend the new Splash gummies. They’re candy coated and one of the tastiest gummies on the market, a perfect pairing for a day spent watching cartoons.

The Perks of Being a Wallflower

This generation’s The Breakfast Club just made its way to Netflix. Based off the controversial novel and directed by the author, The Perks of Being a Wallflower follows high school freshman, Charlie (Logan Lerman), a troubled boy dealing with his best friend’s recent suicide. Delicately balancing blissful nostalgia with real world tragedy, Perks is as enjoyably endearing as it is deeply relatable. With help from Emma Watson, Ezra Miller, and even Paul Rudd: you’ll laugh, you’ll cry, you’ll remember what it felt like to be teenager. Be sure to pack an 1/8th of Jet Fuel Acai from Srene for this emotional trip down memory lane. This movie is a bit of a rollercoaster, so you’ll want a balanced strain that help you reach the highs and deal with the lows of being a socially awkward teenager again.